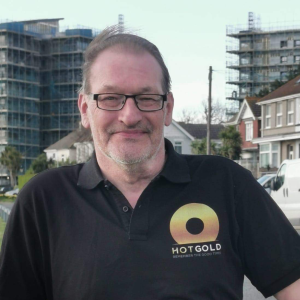 Join Paul for your Hot Gold drive time Monday to Friday from 4pm.

He'll have your all the best 70s, 80s & 90s songs, all your traffic & travel, plus lots to keep you amused including 2 helpings of Double Gold with 2 from 1 artist, the latest Echo headlines, Sport, TV & Films, Birthdays, but can you guess the song lyrics on Straight Lines?

Paul was born in Yorkshire, but moved to Ferndown at age 8, when his parents opened a shoe shop.
He went to Christ the King school in Kinson, then on to St Peters in Southbourne, finishing his education at Bournemouth college at Shelly Park. During this rime he discovered a love of music and ran a mobile disco around the area.
Worked briefly at the Continental cinema in winton and a couple of petrol stations before deciding on radio as a career.
In 1979 he presented the 'New Faces' programme on Radio Victory, which earned his first full time job at Essex Radio as evening presenter and cover presenter for other programmes.
He then transferred to Radio Mercury, again with an evening programme,  but moved to breakfast for a short while.
While at Essex and Mercury he built up the largest mobile nightclub in europe, working for the Williams Formula 1 team. Coke, Virgin and the Milk Race.
Paul launched Delta Radio with the breakfast show, then drivetime. Broadcasting live from Disneyworld Florida for a week, but Delta was a short lived station, and was taken over by H***t the 'destroyer of Local radio'
He moved to France and launched Radio Saudray for the ex-pats in the area, it ran for a few years, but brexit forced a sale.
He returned to the U.K. and presented for a few local stations before settling at Hot Gold Lunch.
Paul lives in Poole.